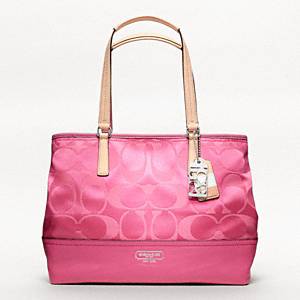 Daniel’s in protest about carrying my pink purse. Over the last couple of days I haven’t been able to carry much. Even toting my purse makes my arm feel like it’s being pulled from its socket. He’s been such a little trooper though. I mean, what 8 year old wants to carry his mother’s pink purse? Undoubtedly, it would it help if it was grey or black, any neutral colour that wouldn’t draw attention to him. However, a purse is still a purse and I can’t blame him for not being particularly cheerful about lugging mine around. Rather than change the colour, I’ll dig out my little wallet to stash in my back pocket.

This latest relapse has knocked me off my feet. I had such high hopes that the steroid treatment would help me overcome or shorten my relapse, but they didn’t. At least not in any truly meaningful way. My arm has lost a lot of strength and control and my left leg feels like it has been cast in concrete.
Yesterday I was beyond grumpy and incredibly off balance. Reminiscent of a tattered old crow, my late arrival at the office was less than stellar. As I attempted to reply to comments about my being in rougher shape than those that had partied hard throughout Superbowl Sunday, I turned and lost my balance – my arm automatically flung itself out to grab the wall to steady myself. Steady would have been infinitely preferable to my staggering, ‘drunken’ display of extraordinary uncoordinatedness. Is that a word? I’d slept poorly and I felt achy. Oh my God, achy… at times, aside from my incredibly sore arms, it felt like someone had taken a board and hit me across the back of my shoulders with it. I just wanted to crawl back into bed and go to sleep… and sleep…
In retrospect, I think that part of yesterday’s problem was that I had eaten a bunch of bread on both Saturday and Sunday evenings. I’m no nutritionist, so my thoughts are purely my own and in all probability sound like total crap to everyone else, but here’s my theory: My over-consumption of bread didn’t allow my body to keep up with repairing the cells that have been under attack by my own immune system during this relapse. My system was too busy trying to deal with the bread and the possible inflammation that likely arose from its consumption. However, I ate well yesterday and feel much better today. Not 100%, but better. The aches have been greatly diminished and while the control of my left hand and arm aren’t fantastic, I’m able to type and manipulate paper. I won’t be doing origami anytime soon, but flipping over paperwork on my desk is manageable… and pink purse carrying. I think I can manage that today.